I could have titled this post; saggy and baggy, sloppy and droopy, knock-kneed and swayback. They may not sound pretty but these are all the telltale signs of impending labor and birth. 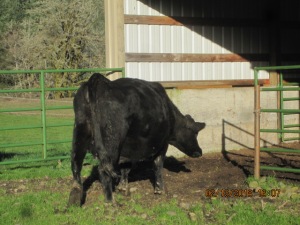 Pressure is showing all the signs. She lost her mucus plug. Her udder is filling up with rich colostrum, and she is having trouble walking because her back has bowed toward the earth while her tail-head rises. And she is hungry ALL the time.

We had to move her out to the nursery field because not only is she close to calving,  she got into the habit of pulling bales off the back of the Gator and into the mud before we could drive up to put the bale into the outside feeder.

It was not too much trouble to separate her from the rest of the main herd since she had been a show heifer when she was younger. Keeping the rest of the herd away from trying to get into the barnyard with her was a little more difficult since the whole herd thought that we were going to feed them all breakfast inside the barn. Once we moved her in, the gates were opened all the way through and she walked in the east end and out the west end into the nursery field where she immediately started eating grass.

Out in the nursery field, she has less of a chance of interfering with the bales as we have fewer on the Gator by the time we drop the slabs of hay onto the ground for the mothers and babies residing out there.

In the field she has many acres of green grass for munching while she awaits the time to deliver.

PS for those of you who are waiting to hear about Paulette who was reported to be as big as a caboose more than a week ago, she seems no closer to calving than she did a few weeks ago. Maybe she is gestating a baby elephant instead of a bovine…