Mike found and annihilated another paper wasp nest found, of all places directly above his head, under the eaves of the house. This is where Mike has his lawn chair for breaks throughout the day, good thing that it wasn’t a recliner or his head would have been directly below the growing hive.

On the other hand the beneficial bees, the ones that pollinate and do not bother with torturing humans, are busy with all the flowering plants right now. The daphne plants that had a setback from the late frost are finally blooming to capacity right now as are the roses, sage and lavender. We see the plants loaded with bumblebees and honey bees as well as being attractants to several varieties of hummingbirds.

As I have been mowing the ding-weeds down in the pastures and barn yards I’ve been watching our ‘Bee Tree’ to see if that hive is doing well this year.

This scarred Douglas Fir holds a large nest of honey bees and has been doing so since before we bought the property forty some years ago.

It is unknown how the tree got scarred up in the first place but it has done some amazing growing to protect the area from getting hurt again. The tree keeps growing around the wound without sealing it up and long ago a swarm of honey bees found the small crevice inviting and this became their spot of choice to grow their hive. 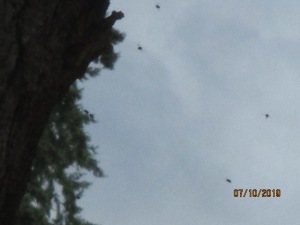 It is good to see that this year the swarm is very active and from a distance we can see the frantic comings and goings of many workers.

A bit of zoom with the camera shows the bees in flight as some head toward the tree while other are taking off for another round of pollen gathering.