I was coming down an old skid road on my way out of the woods and say some of the main herd grazing along contentedly. This field was one of the hay fields that we had harvested in June.

This time of year, the main herd has access to the large fields for grazing.

The grass did not grow during the very hot summer but now that the moisture season has arrived there is quite a bit of foraging to be done. The herd will be able to nibble grass until the weather turns colder and the freezing weather stops growth.

We are feeding hay twice a day along with the open grazing to make sure they have enough to eat. The mother cows are already pregnant and we want the babies they are carrying to have a steady intake of nutrients.

This post was supposed to start by saying that the last of the snow has finally melted from the gigantic piles that were formed where the massive amounts slid off the metal roofs (?? would that be rooves?) of the barns. See what I mean? This winter is even unsettling for my words.

Anyway, back to may rant… 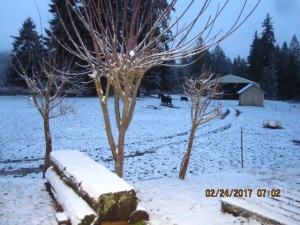 At daybreak, a new skiff of snow greeted the animals in the bull pen, with the chance of 2-4 more inches during the day. It was barely 24 hours since we had finally melted the last of the snow here at the river level of the farm. I was reluctant to climb the hill to check out if we still have snow at the top of the ridge, but I would have assumed that it would of either been gone or close to it by now.

It will be detrimental to move the main herd of cows to the far pasture today as planned since they cannot graze when the snow covers the grass. The move will have to wait at least a day or two.

One of the elk herds has descended on the far hay field/pasture with a vengeance. It was hard to count as they kept moving, swirling around in a slow-dance version of circling the drain as they pick through blades of grass that are now exposed after the snow finally melted. The total neared 50 as far as I could tell with at least 3 bulls in the bunch.

This far field was supposed to be the grazing area for the main herd in a couple of days. We take fields out of rotation for feed after we spread manure out on the grass. The elk have determined that the field has broken down the manure and the grass is ready for eating, they beat us moving the cows to this pasture.

I can’t blame the elk herd, they are probably hungry from this unusual winter, and this grass that we had so generously fertilized for them 2 months ago is just the best tasting area they could find.

We are still planning on moving our main herd of cows over to this far pasture, but in the light of the current grass-stealing events, we will have to move the cows back out of this pasture sooner than planned and augment their feed with hay.

Our large herd of elk are back. They happened to find a small area in the middle of a large field where the snow had evaporated from the couple of weeks of dry, cold weather.

This herd which averaged 40-43 animals has grown over the last year. Even though it was hard to count as they moved around the field, it looks like the number has grown closer to 50 in this batch.

Another herd about this size was reported about 20 miles away. That area has a lot more humans living there and the elk are making nuisances of themselves by browsing on ornamental hedges, dormant rose bushes and expensive Japanese Maple trees.

Here at the farm, they keep nibbling on my cedar seedlings that I am trying to get established in the wetter areas around the river.

We have been keeping a closer eye on the herd these days after a neighbor from across the ridge stopped by. They were missing a couple of their Scottish Highland heifers after a cougar had run them through their pasture fences. Over the years the mountain lions have been seen around the farm. Earlier this spring, a friend that had been driving past the farm, saw a big cat walk down the driveway, cross in front of his car, leap over the fence and head toward the river. END_OF_DOCUMENT_TOKEN_TO_BE_REPLACED

One of the two elk herds that travel through our farm are back for a visit. This is the smaller of the two herds with about 16 animals. The other herd is near 40 animals the last time I saw them.

Both herds have increased over the last year even though there was a lot of hunting activity last fall and winter.

It is such a joy to watch these magnificent animals while on the other hand knowing that they are eating the grass that is intended for our cows. Mike has been on high alert trying to keep the elk from camping out too long on Schmidlin acreage. In the evenings he heads out on little forays to whistle and holler whichever herd is on the farm, in an attempt to dissuade the critters and their plan of eating all green foliage.

I could actually dine in the garden with the good china, the polished silver and the sparkling crystal. I could even dress up and make it an affair to remember. 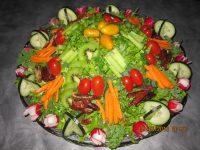 I could, but I don’t. It is much more likely to see me in the early morning, foraging for breakfast. END_OF_DOCUMENT_TOKEN_TO_BE_REPLACED