The cows were hanging out around and under the bridge during the night for a little protection from the snow. It was a good location, close enough to the river for a drink, only a few steps away from the hedgerow of blackberry briars that they like to snack on and alder trees close by to moderate the wind. 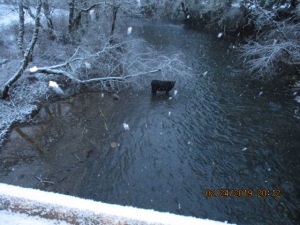 From my vantage point on the bridge I could see this heifer had another idea. She waded out into the water to eat the delicate tips off the alder that had fallen.

This is the same alder that the beavers have been busy with trying to bark.

When this heifer realized that I was going across the bridge to start the feeding process, she abandoned her nibbling to join the rest of the herd in their quest to get the the outdoor feeders before we could get them filled with hay.

I was filling the stock tanks with water the other day and had some time to watch the heifers that are hanging out in the outside barnyard. While I was moving hoses, one enterprising heifer found a way to get to that annoying itch.

At first she tried to swing her head and lick at her right shoulder while she was standing up and could not reach the itch. Not yet ready to give up, she laid down and with her front legs curled under her, swung her head way back and licked long strokes at her annoyance.

She must of quelled the problem area because as soon as she was finished she righted herself to resting position and gave a big yawn before settling in for a nap between rain showers.

While I was out filling the stock tanks with water, I noticed one of the heifers in the outside pen. She had a few cedar shingles knocked off the side of the shop and a peep hole available to stick her head into.

I snapped the picture just as she pulled her head out and realized that Mike was inside the shop. He was at the workbench sharpening the shovels we use for planting tree seedlings.

The sights and sounds inside the shop were fascinating for this heifer and she peeked at him the whole time he was grinding and filing the metal edge of each shovel. Mike said it felt like he had a supervisor watching him the whole time.

Which reminds me, maybe it’s time to do a repair on the shop wall.

Frick, the most curious of all the barn cats has a thing for heights.

He is always climbing the hay stack, the main building beams, the metal gates and stanchions. He likes to be above anything that is going on.

Today he wanted a good look at this heifer and climbed along the metal head gates before striking off onto the rounded metal gate. Just as Frick got close to the heifer, she lifted her head and tried to give him a good lick with her long tongue. She barely touched his tail, but it sent Frink scurrying across the gate, down to the water stock tank, across the edge and down onto the ground where he could scamper away.

No harm, no foul. Both heifer and Frick went back to their regular duties of watching me fill the stock tanks, but rest assured that Frick will be back at his aerial stunts shortly.

I was out mowing grass between the pasture and the road and noticed one of the heifers with her head dropped low . At first I thought she was nibbling grass, but she was standing perfectly still.

That was when I noticed about 6 cow-birds running back and forth across her body. Cow-birds are small and a brown/grey color. They are unafraid when hanging around the cows in the field and are known to hitch a ride every now and then on a bovine as they look for small insects to add to their diet.

This heifer was enjoying the sensations along her skin and stopped moving so the tippy-tap of tiny feet would continue. The birds would jump off every now and again only to return to the task at hand (make that foot).

It was a fine day to be out in the sunshine and get a massage at the same time.

On the third day of our rain drenched thaw, with the river still too high for the herd to cross, Paulette decided to have her calf.

The herd huddled by the river in the rain and we fed yet another breakfast in the too small pasture. At this point, the bulk of the snow was melted and had already flowed into the river. Feeling sure that the river would recede enough in the next 24 hours, we planned on moving the baby in the morning, across the river via the Gator and have the cows swim across to meet us. The herd had other plans.

When they heard the Gator start up signaling the evening feeding was close at hand, the 19 pregnant cows swam across. I stayed with Paulette and her baby to keep them from crossing fearing the water was much too high to take the little calf.

Mike went over the bridge to feed the herd and was going to come back with the Gator so we could transfer the baby from the wrong side to the right side. Paulette didn’t like being left behind, she out-maneuvered me with a sneaky end-around run. She had her calf right by her side as the pair plunged into the river.

Mike and I were up on the bridge when we saw Paulette make it across and the little calf, just a bobbing head on the turbulent surface, was being swept downstream in the current. I was afraid to even take a picture, because it did not look like it would be a good outcome.

Paulette was bellowing and the calf was frantically swimming but being pulled farther away with each moment. Miraculously, the calf was able to get out of the swift current near a bend in the river and got footing on the rocks where the water wasn’t as deep.

By the time we could get over to the other side, Paulette had her baby away from the river and was heading toward the outdoor feeders. We intercepted the pair and put them in the barn with Plum and her baby bull, Snowcap.

After a chance for Paulette to get some dinner and the baby to get dried off from the icy plunge. Both mother and baby are well and getting along well with their pen-mates in the nursery field. 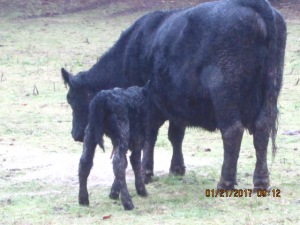 A new set of hooves were found in the barn this morning. Our show cow, Sitka had a cute little girl.

To say the least, we were a little surprised. Sitka had delivered Mapleine on March 10, 2016. She must have been bred back only a month later in order to have her next one in January. Just like humans, cows usually don’t become fertile after delivery quite so soon especially when they are nursing heavily.

She looks a little scruffy in her first picture, but once her mom got her all cleaned up her hair is long, jet black and fluffy.

By her size, we think she may be a week or two premature, but she is very happy and healthy. Cutting circles around her mom and sneaking out the door to cavort in the snow before coming back into the shelter of the barn.