The sunrise doesn’t seem as harsh today. No wind is blowing and no storm clouds brewing.

A few days of more normal weather is expected, and with that I will expect to hear the frogs in the swamp re-start their spring songs that had been curtailed by the blast of two weeks of winter weather.

For the last couple of years I have been testing the Old Farmers Almanac weather predictions about the amount of foggy days in August tells how many snow days you will have in the winter.

Last winters wild ride of storm after storm seemed to be only half of the snow prediction if I added up all the heavy fog, early burn off and East side only days, so last August I watched for foggy days again. It was tougher this time because we were in one of the worst and smokiest fire seasons during the month of August and I wasn’t sure if I was counting the fog clouds or the smoke on many of the days. END_OF_DOCUMENT_TOKEN_TO_BE_REPLACED

Less than 12 hours after getting the seedlings planted into the ground along the river, the snow started falling.

Planting seedlings in the snow is difficult because if snow gets into the area around the roots, it could form pockets of air as it melts creating space to dry out the roots of the tender plants. Having the plants in the ground before the snow means the moisture will melt slowly into the soil to keep the roots moist and creates an insulating blanket against the coldest days of the winter expected during the next week.

I enjoy watching celestial events. During  summer nights I can be found in a comfy lawn chair, stargazing as the Leonid meteors scoot through the sky. I have been seen by drivers on the county road as I flop on the lawn to observe cloud formations. I scan the horizon during daybreaks and sunsets, moon rises and moon sets, the first star at dusk and movements of the Big Dipper throughout the year. 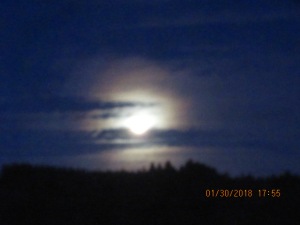 On the night of the Super, Blue, Blood Moon with total eclipse, the media had everyone alerted to watch the sky.  The Oregon cloud cover doesn’t always allow for clear viewing of celestial events,  so it makes each showing that much more special.

At moon rise, the  ‘super’ part of the show brightened the fields and I could see the critters as they bedded down for the night. Minimal high clouds enhanced the sight along the horizon. I found myself wide awake at 11 pm with the anticipation of the upcoming event and trepidation about sleeping through the sky show with fog forming in the valley and inching its way across the trees.  At nearly 4 am, after catching up on my reading, the eclipse started as the fog thinned and nearly disappeared. I was able to watch as the darkness spread across the face of the moon to totality and remain that way until the moon set on the horizon.

I wasn’t good for much work the next day from all the sky watching the night before, but it was worth every bleary-eyed minute.

According to National Geographic there will be no less than 7  sky events to look for during the month of February. I’m stating this so everyone will know that I may not be good for a lot of daytime activities this month.

The plan was to have my right-hand helper come to the farm for the day to help with the cleanup of the old fence line around the river. Some spots have half buried cedar posts, some places have bits of barb wire fence that has grown into the brush, blackberries and small trees that have continued to multiply where the fence had been 50 years ago. It is a labor intensive process and it helps to have extra hands.

Nature got in the way of the plans and sent a gusty storm that brought dangerous waves to the coast line and whipped the trees throughout the Coast Range and into the Valley. Here at the farm we know that there was at least one tree that snapped off back by the log landing and we lost power about 8am. We cancelled the fence line clean up until we have a day that is not so tumultuous.

Just before dark we got electricity back, we had just finished the evening chores and was looking at the possibility of PB&J sandwiches for dinner. With the power back, we were able to have a hearty dinner and catch up with the news to see how things were going with the rest of the world.

Being without power for just a few hours reminds us that we really have things easy and comfortable and makes us grateful for the return of our creature comforts. 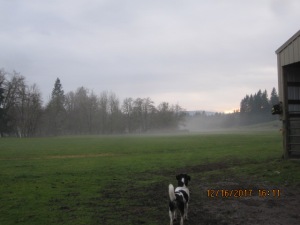 The cold snap broke and we are slowly getting back to a weather pattern that is more typical. Pipes and hoses are no longer frozen solid and we can water the animals with the irrigation again between nights that freeze and days that thaw.

Forecasts have been waffling for a week about the chances of snow on the 25th. We had less than a trace two days ago and it disappeared as the sun came up.

In the fields, the ground is still frozen several inches down below the turf while the moisture in the air hovers in patches across the trees and into the dips of the field.

Butler the dog watches the fog as it dances around. He is hoping to see a coyote or bird move about so he can go running, but for now it is just the fog.

Can you feel it, see it, sense it?

Its not warmth I feel, but a glimpse of nearly a minute more of daylight than the day before. The daylight cannot really be seen, the clouds are obscuring any sight of the sun. But it can be sensed, we are on the way to shorter nights. It’s a good thing because I have a problem with the day finishing around 4:30 in the afternoon. Once that sun sets I start watching the clock and judging when I can go to bed.

It is hard to get the end of the year bookkeeping accomplished when I start yawning before 7pm.

The year has passed so quickly, yet here I am itching for the days to pass quickly so I can get back to  more daylight. Fickle me, but that is how I roll.